I needed a break from painting my Germans for Chain Of Command, so starting this past Thursday, and finishing today, I worked on terrain.  I planned on making some bocage, but after a trip to the hobby store, I ended up with some strip styrene to make tank traps with.  Then, I saw some great 15mm stone walls on Brookhurst Hobby’s site, so I ordered those.

In the model airplane section of my local hobby store, I found this curved piece of wood, as well as the flat pice I used as a base.  This will serve as the basis of my bocage.  I glued them together, let it dry overnight, then cut them with a circular saw, since I don’t have anything more subtle.  Then I sanded the sharp edges to a slight curve. 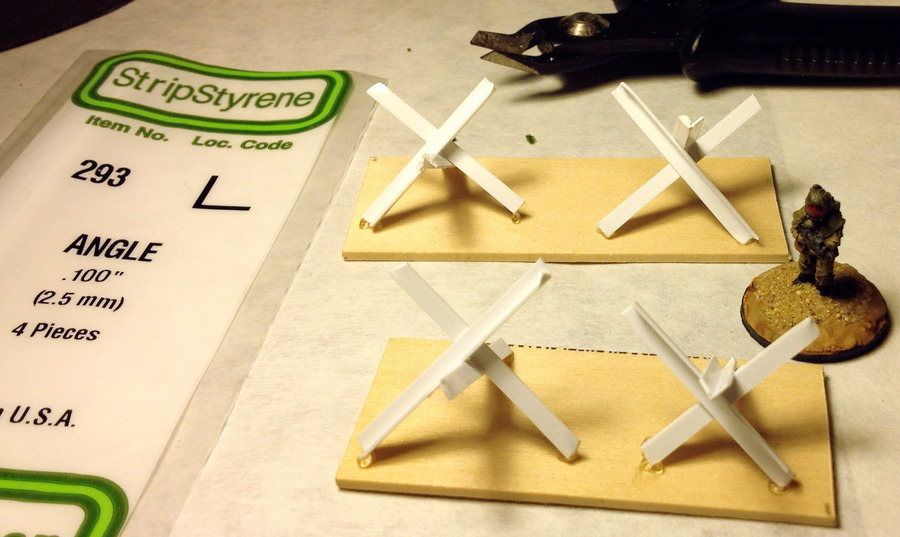 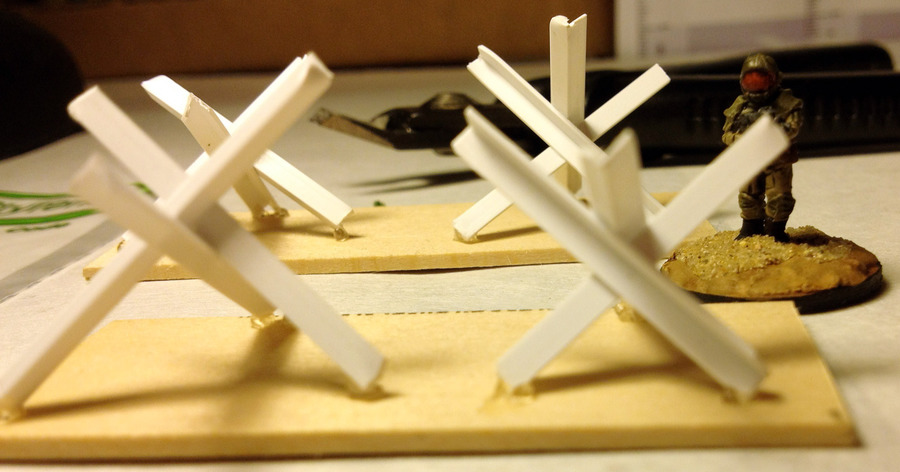 At that same hobby store, I found this strip styrene.  They had all kinds – I beams, hollow square, etc.  I thought it would be perfect for tank traps.  I used superglue to make the tripods, and glued them to some leftover wood from the bocage base.

The mini is a 15mm Sci-Fi soldier from Rebel Minis.  I’ll be using him as a size reference today. For you Flames Of War players, he’s almost exactly the same size as Battlefront’s plastic soldiers. 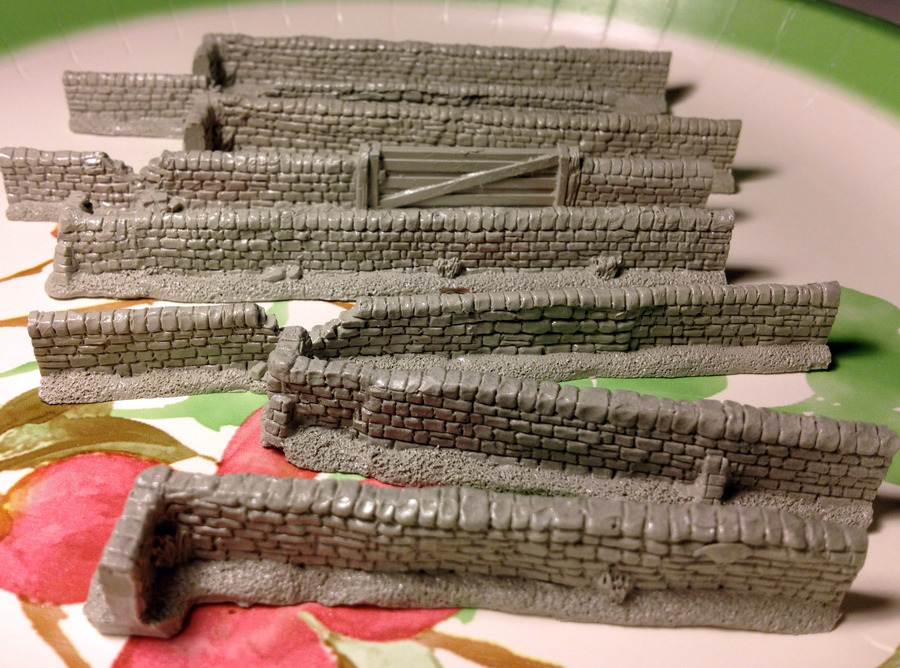 These are the 15mm walls, cleaned and ready for primer.  They are resin, and are made by Peter Pig. 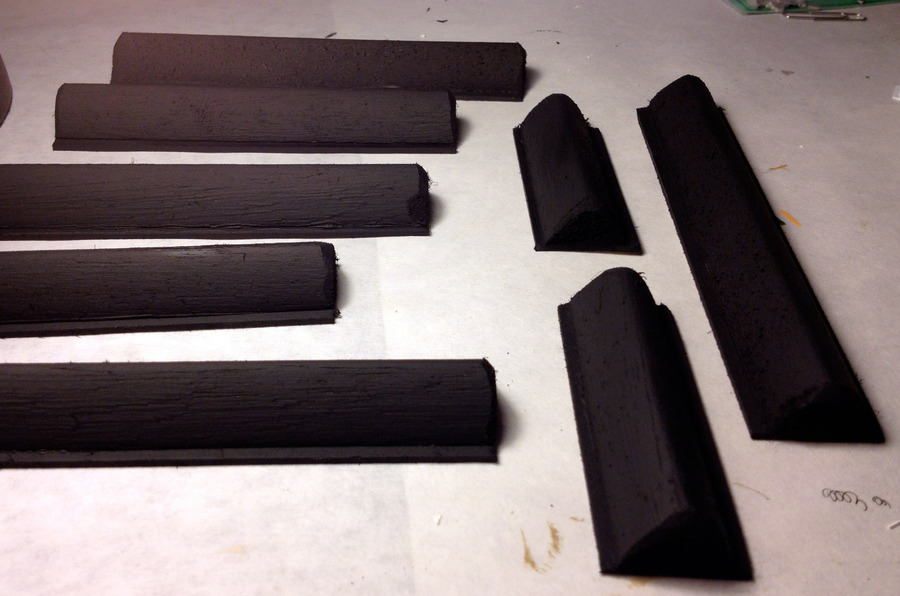 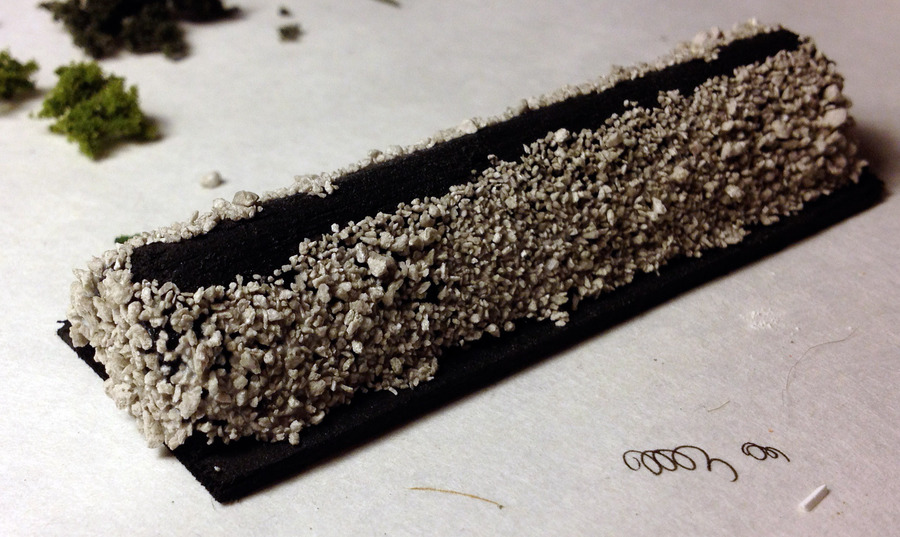 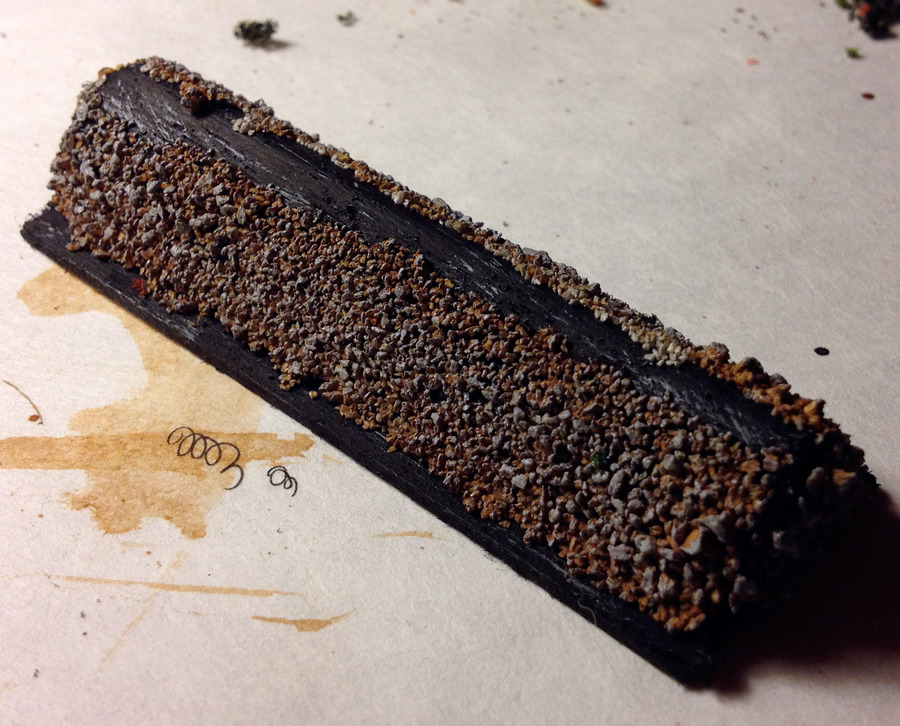 I primed the bocage black, glued some model railway ballast rocks to it, and let it dry overnight. Then I used some leftover Citadel sepia shade on it, and let that dry.  Last, I dry brushed it gray.  I like the black / brown / gray combination.

I used some vinyl spackling mixed with sand to fill in the base of the tank traps.  I talk about that process in several other blog posts.  I let that dry overnight, then primed it all black.

At the same time, I primed the stone walls black. 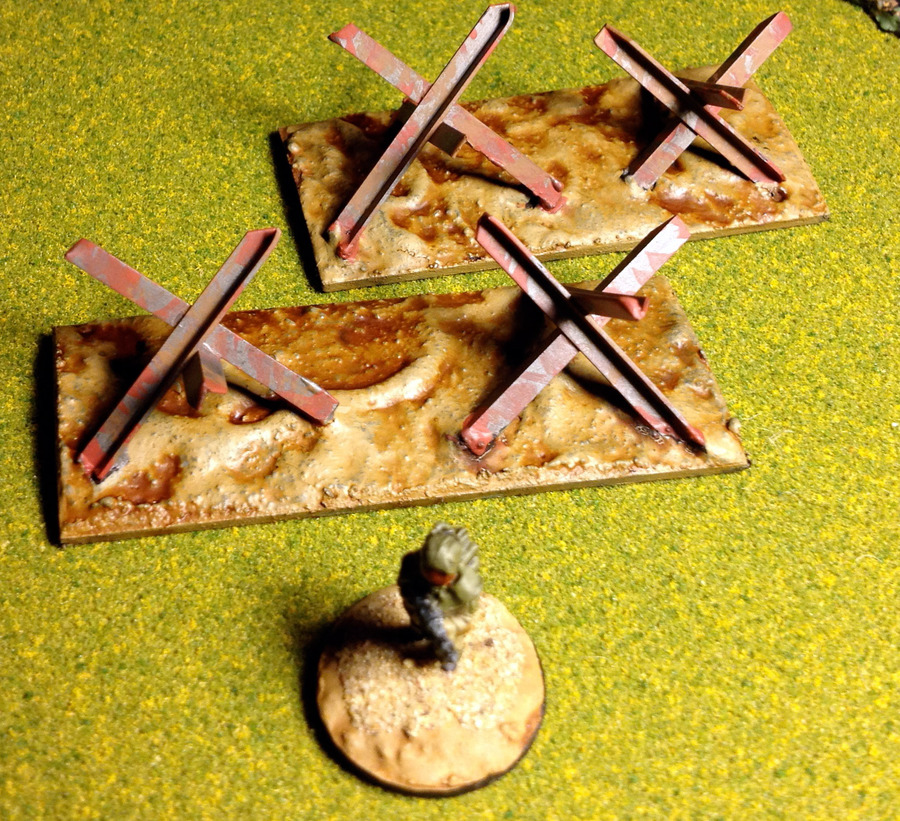 I painted the tank traps and base.  I used the sepia shade on the base to good effect, I think.  I could probably use more practice painting rusty metal, though.

I’m really happy with how the walls came out, and they were really easy to paint.  A dry brush of gray, followed by a dry brush of white.  Then a green dry brush for the grass, some light dabs of tan, and a tan paint for the weeds.

The gate is brown, with a yellow-brown highlight and a black wash. 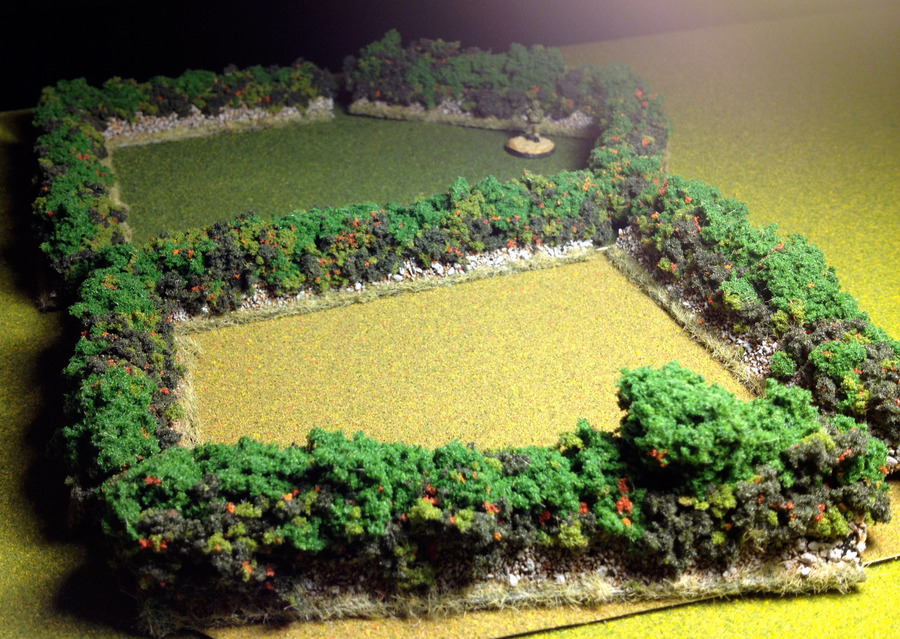 The bocage was a lot more work than the rest.  I used Aleene’s Fast Grab Tacky Glue.  I spread it all over the top, then stuck the foliage on it.  I used several different colors.  After it was dry, I touched it up with some more glue and foliage.  When that was dry, I soaked the whole thing in watered down PVA glue.  That took 2 days to dry, but they are pretty solid now.  Nothing is falling off these bocage.

Finally, some static grass on the edges.  I think I need a “greener” static grass.  This is “winter grass”.  I need to get some “summer” grass or something like that. 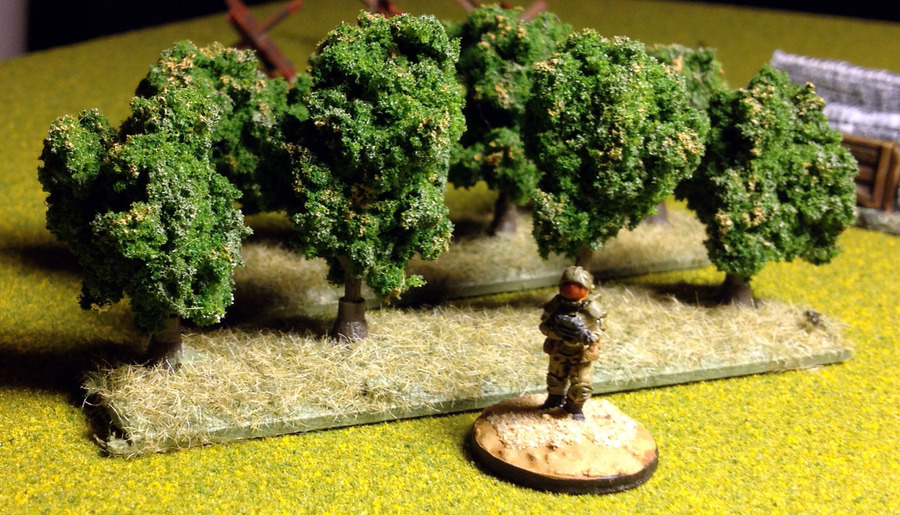 I had originally ordered some Woodland Scenics trees from Amazon when I ordered the foliage, but they turned out to be too small to stick on the bocage, so I based them on the last of the leftover base wood from the bocage in 2 groups of 4. 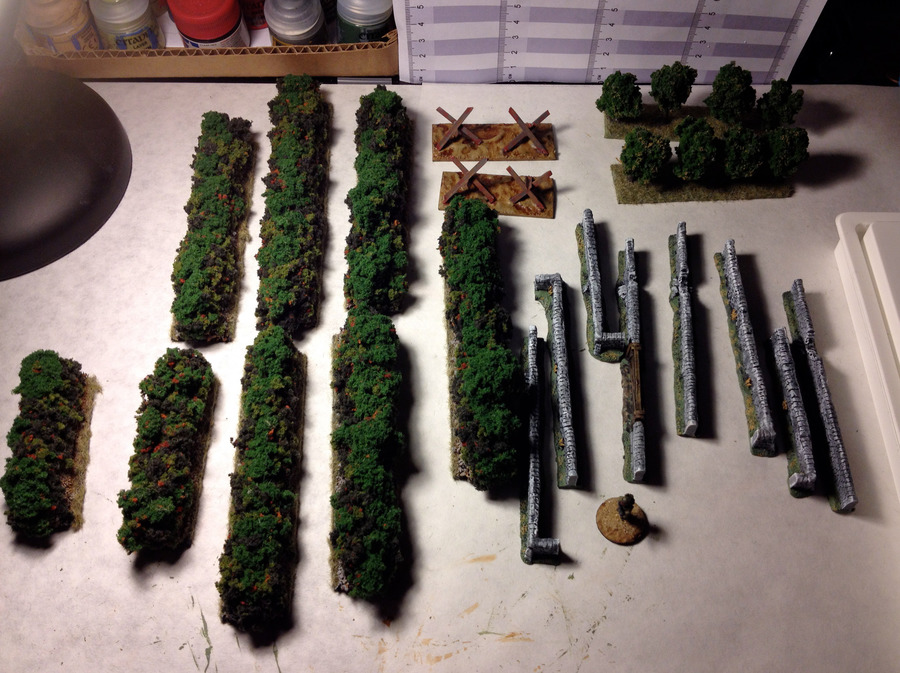 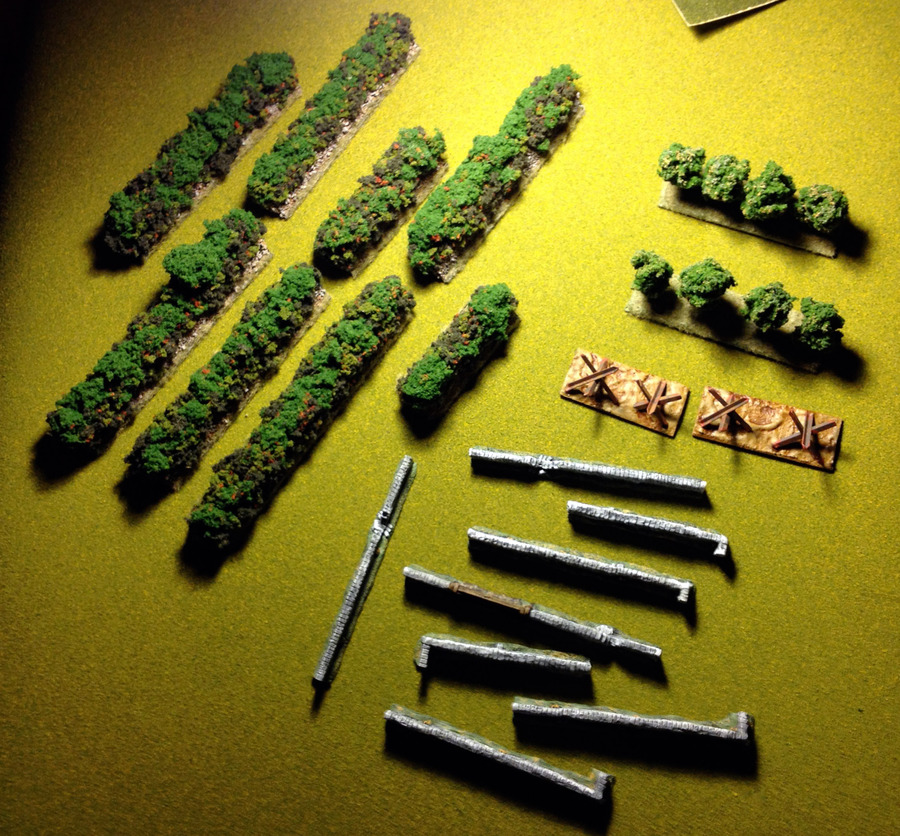 The fruits of 7 days of labor.

I’m going to get back to painting my Germans, but at some point I need a lot more trees, some more tank traps, some farm fields, roads, minefields, etc.  The list goes on.

I really enjoy making terrain.  It’s a nice break from painting minis.  Now I can attack my Germans with renewed enthusiasm.

I don’t want to overstep, or come off as a shill (I have no connection to Too Fat Lardies), but I have to tell you about these new WWII skirmish rules, Chain Of Command, from Too Fat Lardies.

These are the best skirmish rules I have ever read. They are revolutionary in the way that SAGA was when it came out. Like SAGA’s battleboards, the “blinds” phase, along with the dice activation and “Chain Of Command” dice will totally change the way you look at WWII gaming.

It’s a “platoon plus” game – you’ll have an infantry platoon plus support – maybe an additional squad, or off table artillery, or a tank, mortar, etc.

This solves the “all my troops are known and within 12 inches of my table edge” boring deployment issue. Your opponent doesn’t know exactly what you have until you deploy it on the table. By deploying from a jump off point, you start a lot closer to the enemy than the table edge. Jump off points also enable ambushes and resupply, and are vulnerable to being overrun by the enemy.

This blinds mechanic, all by itself, is revolutionary. All modern games should use this.

Next is the dice activation. You roll several D6 (usually 5) and the result tells you what you can activate – a team, a squad, a leader (who can activate his squad, or give other commands) etc. A roll of 5 on a die also increments your Chain Of Command die. When this gets to 6, you can take special actions that have a greater impact on the battle.

Chain Of Command from Too Fat Lardies. My 15mm Germans are about 1/3 done. You can use your Flames Of War figures as based, or your 28mm Bolt Action figures (but I’m a big 15mm fan, so…)

Too Fat Lardies made a series of videos explaining the game.  They are excellent, and I love their terrain!

A while back, I got the Flames Of War Open Fire! box set as a gift.  There’s 100+ 15mm miniatures in there, as well as the FoW rulebook, painting guides, and more.

Since then, Too Fat Lardies released their excellent WWII skirmish rules, Chain Of Command. Reading those rules, and reading the FoW rules, I quickly decided I’d rather play Chain Of Command.

That doesn’t mean the Open Fire! box set is useless.  Far from it.  The miniatures in that box are of excellent quality, and there are a lot of them.  Chain Of Command is intended for 28mm, but the rules state it can be played in 15mm with no adjustments.  I already play Sci-Fi in 15mm, so I have lots of terrain that can do double duty.  Using the FoW minis to play Chain Of Command in 15mm is a no brainer for me.

So, tonight I assembled a German platoon, as specified by the CoC army lists, from my FoW minis:

That’s the platoon command group in the front – a leader with a 2 man panzershreck team.  Then 3 squads, each with a leader and panzerfaust, a MG42 machine gun with 2 crew and a rifleman, and six rifleman.

Here’s a size comparison between the the FoW minis and some 15mm Sci-Fi minis from Rebel Minis I have in progress:

I’m almost done with my 6 point SAGA warband.  Here’s some dane axes from Gripping Beast, which I got from their US reseller, Architects Of War: 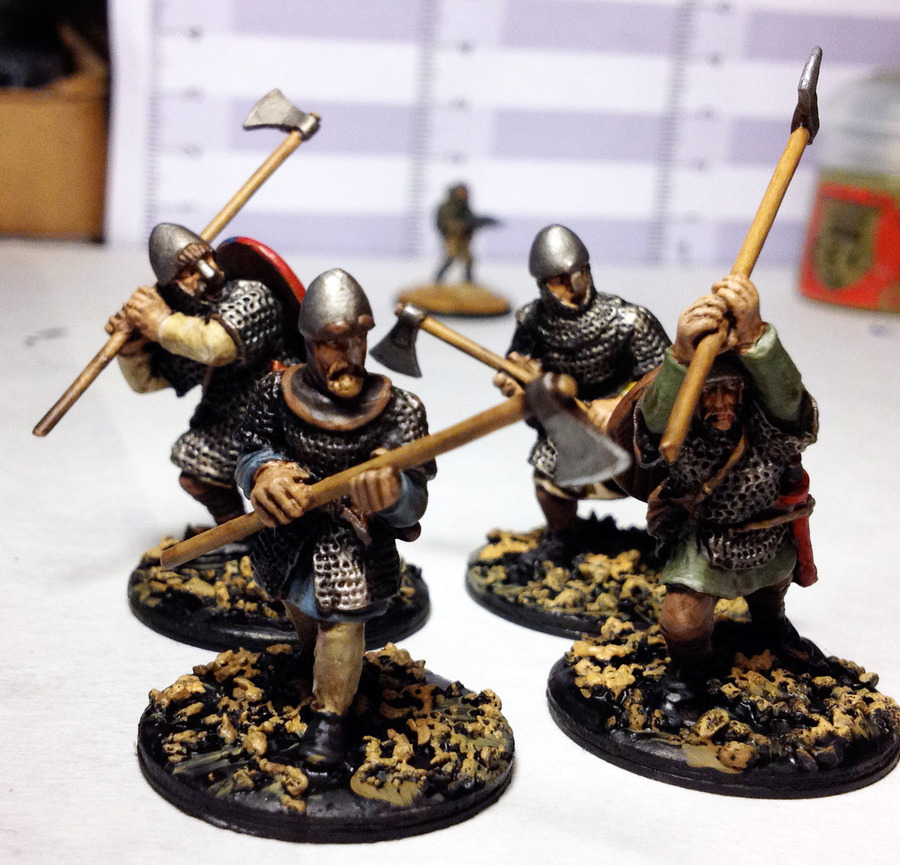 I primed them with The Army Painter’s Leather Brown spray primer.  I’ve become a huge fan of their color spray primers and the matching brush paint.  It saves so much time to not have to paint the various straps, pouches – AKA the fiddly bits.

I’ve found a local group that plays SAGA once a month.  I’ve played one session with them, and they are a good group of guys.  I’m looking forward to next month.

All I have left in my warband is to base my levy.  They are all painted, only basing is left. 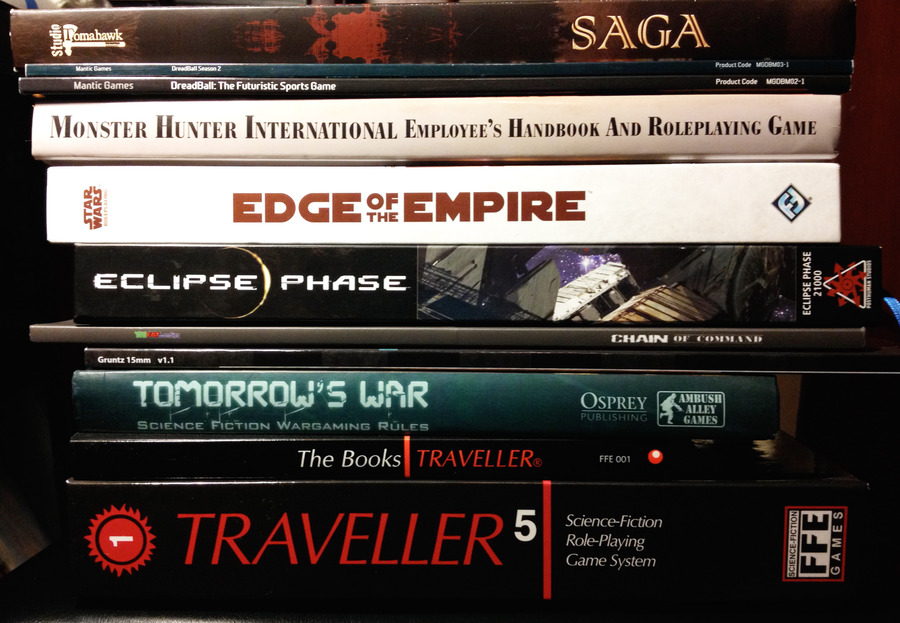