I am recovering from last nights Drunk Quest events, slowly.

Saturday at Kingdom-con was much busier.  All the tables in the wargame room were being used, and there were a lot more people around in general.  Parking was tight, but I eventually found a spot.

As I said last night (this morning?) I played a lot of Drunk Quest.  It’s a very fun game.  I also played a demo of Flames Of War.  That was really fun.  We played with the figures provided by the Open Fire! starter pack.  I played the Allies, and I had 2 groups of tanks, and 1 group of infantry.  Tom, who was hosting the demo, played the Germans, and he had 2 groups of infantry and 1 group of tanks.

The figures are plastic, 15mm.  I was very impressed with the details, and the paint job and basing on them was really good.  The game took about 2 hours, and I really enjoyed it.  Tom plays regularly at a local game store, and I might go over there and play again.  Here’s some pics: 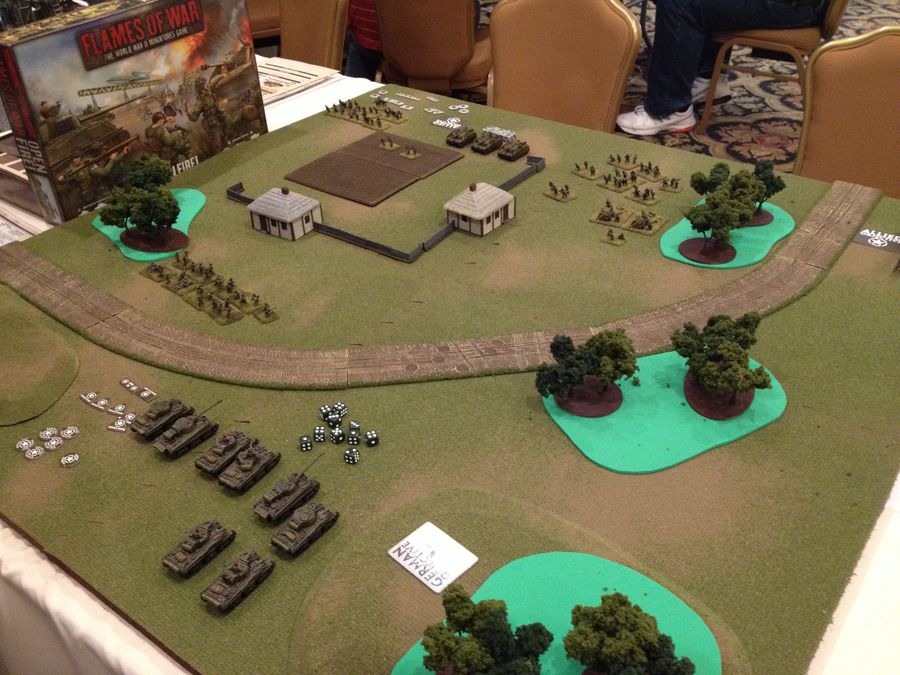 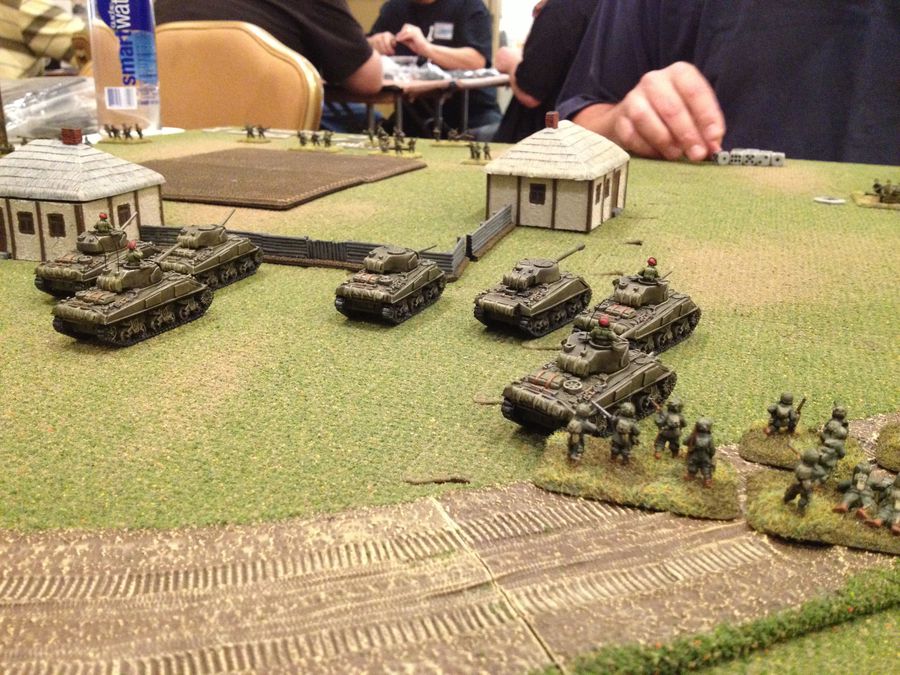 And here’s some pics of Drunk Quest: 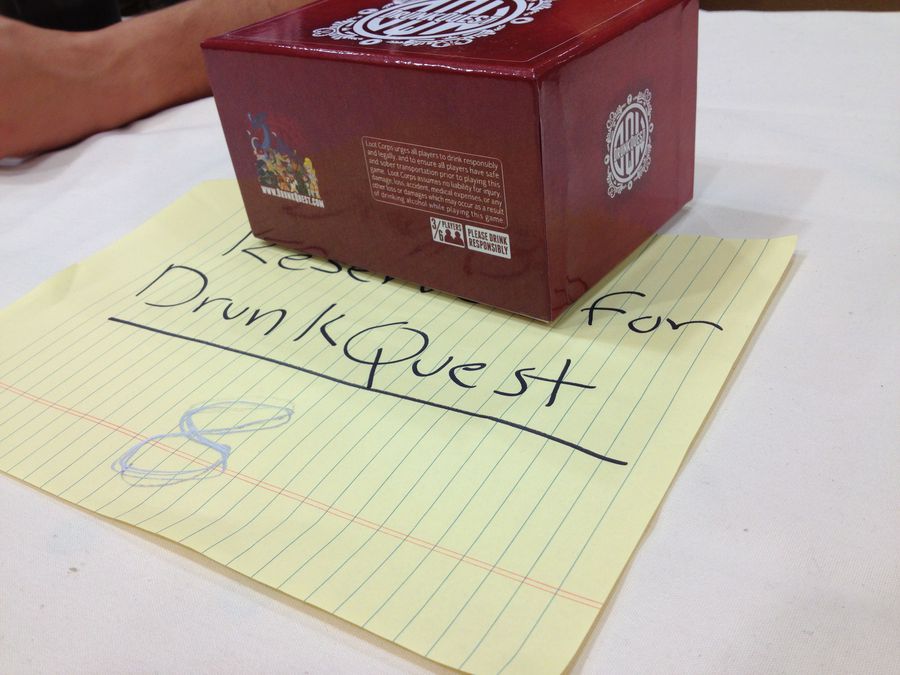 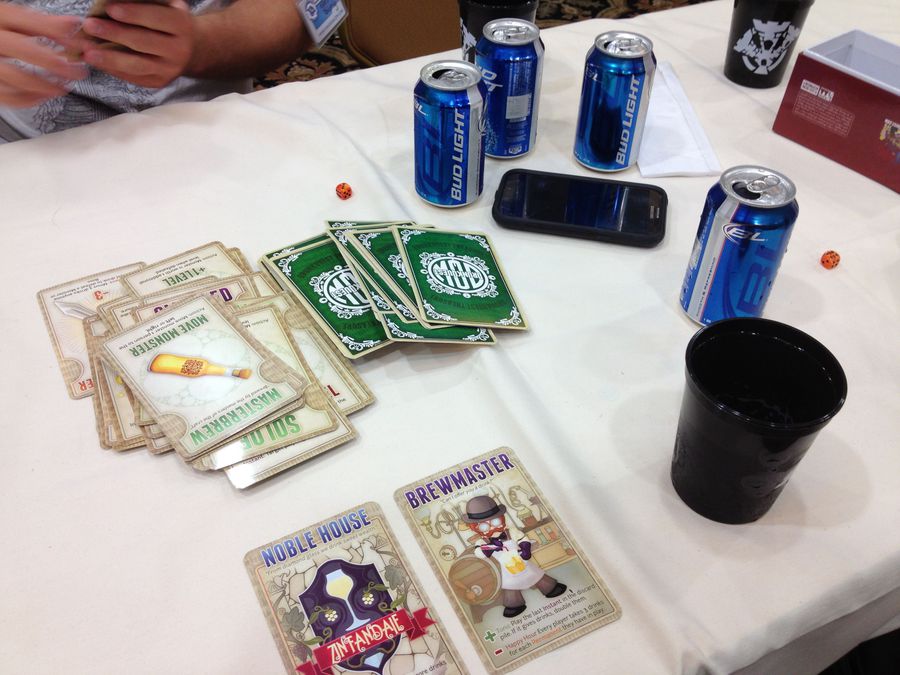 At some point today, I’ve got to go back and get my car.  I took a cab home last night, as I was in no shape to drive. 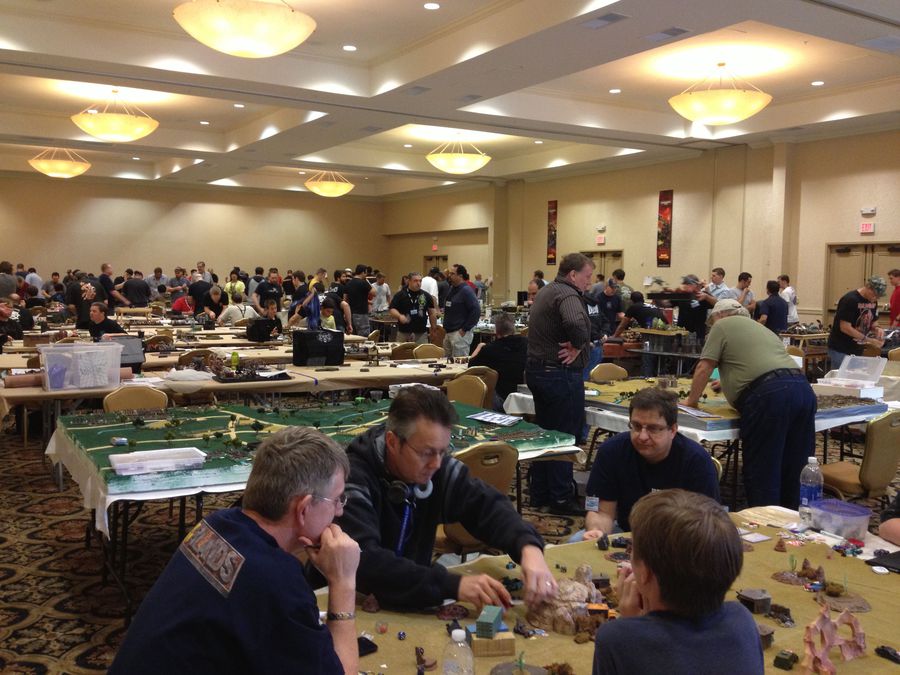 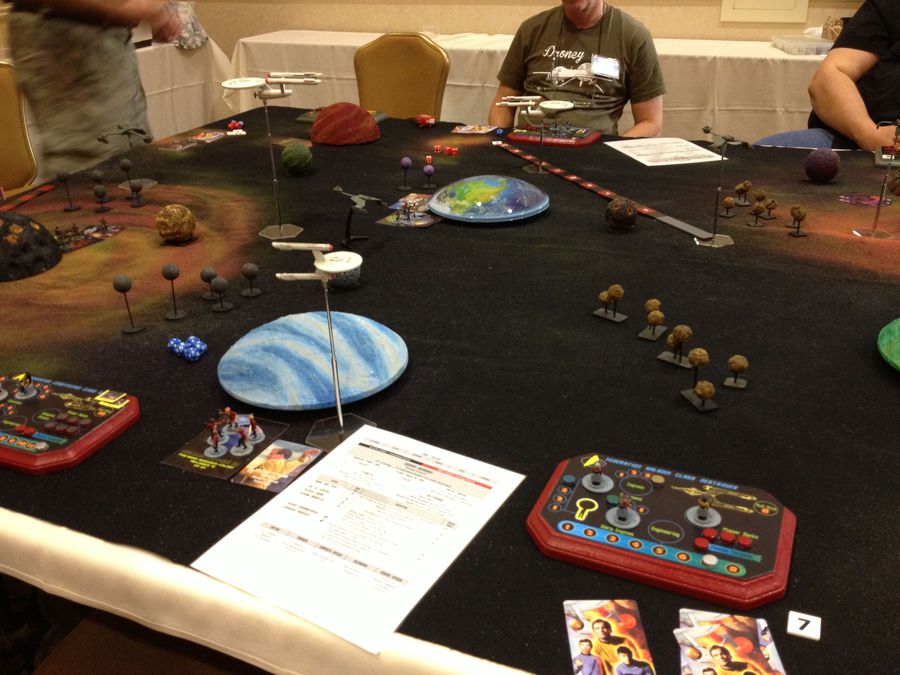 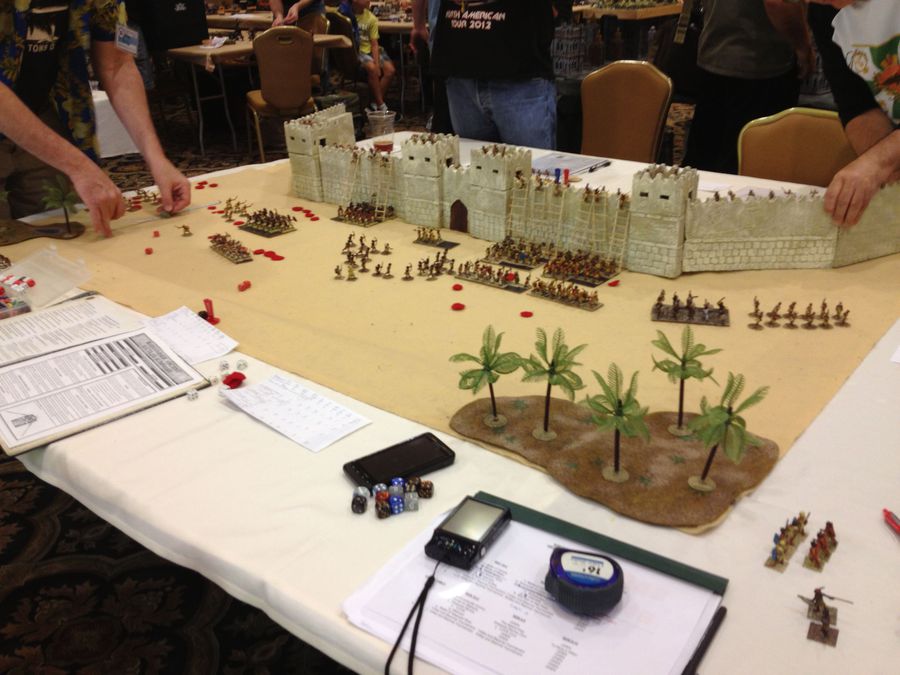 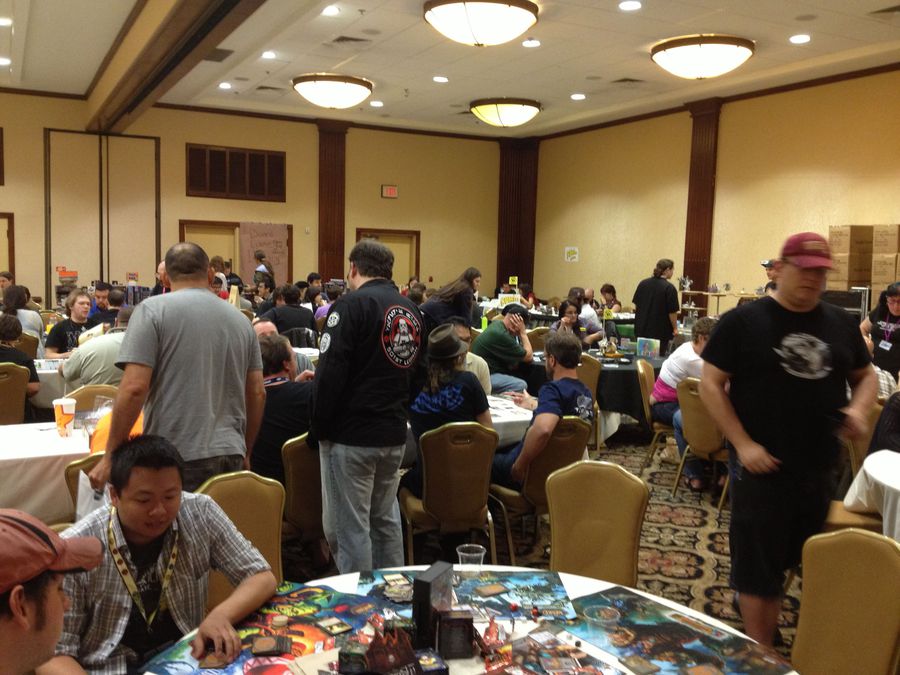 Drunk Quest kicked my ass.  I’m drunk right now.  If you play games, and drink, then Drunk Quest is a game you need to get.  The authors and artists  and play testers were all there at Kingdom-con, and they ensured a good time was had by all.  They were all really cool people.

I also had a great time playing Flames Of War, but the write-up for that will have to wait until tomorrow.  As I said, Drunk Quest kicked my ass.  I sleep now.

Kingdom-con is a small gaming convention that I found out about from a newsletter I picked up at a local game store.  It’s being held 5 miles from my house, so I really have no excuse to not attend.  It’s $50 at the door for a 3 day pass.  They have a large wargaming room, mostly Warhammer and historics, a central lobby with several tables of miniature games, and another large room with open gaming, 10 vendors, and a game library.  The game library has hundreds of games anyone can check out and play.

So, here’s my pics and comments: 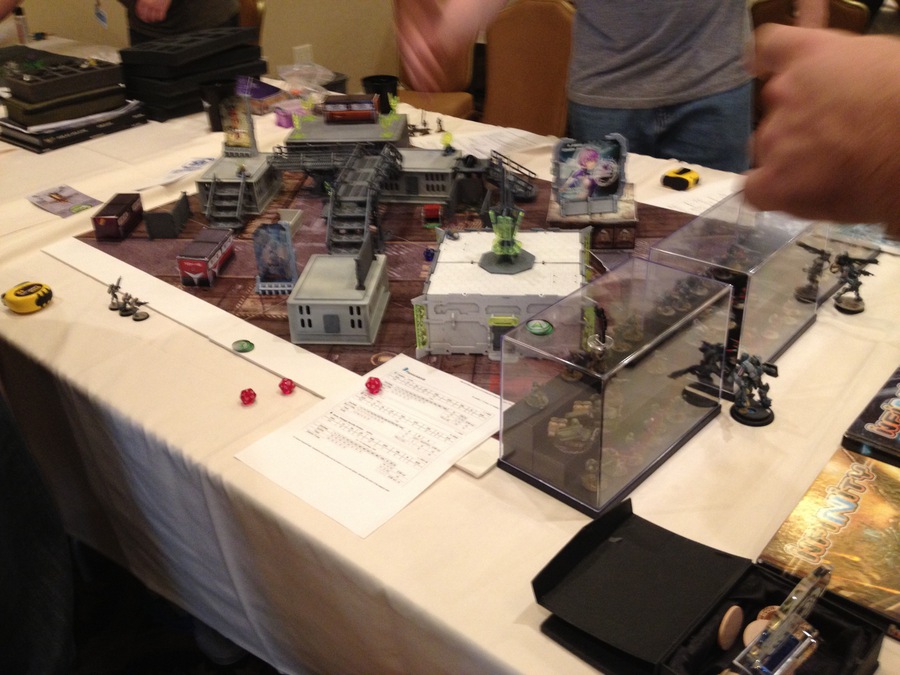 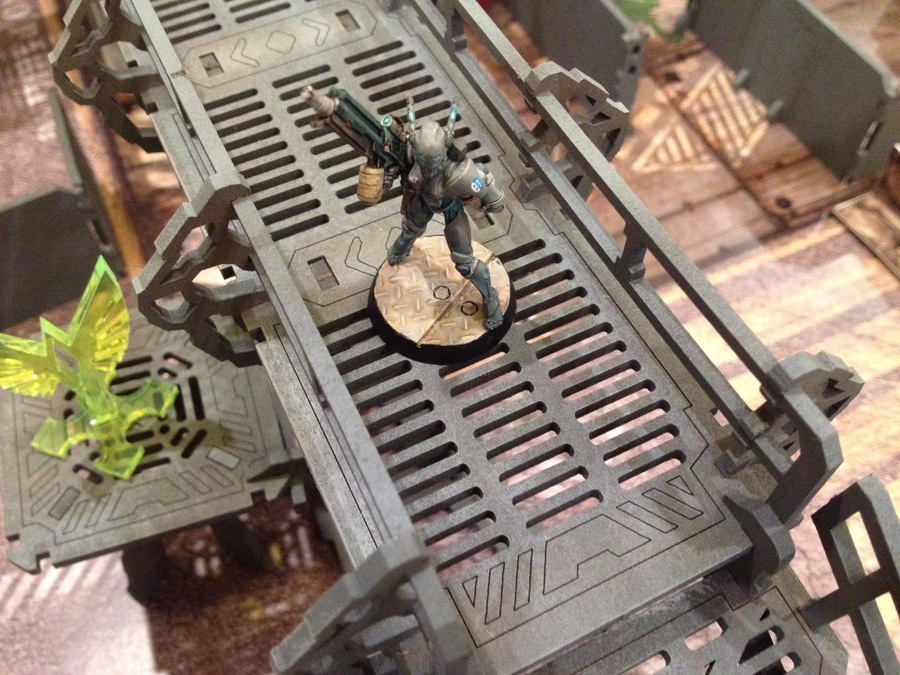 I played a demo game of Infinity.  I’d never played before, but it was easy to pick up.  We played 4 figures to a side, and the game took about 30 minutes.  I won.  🙂 The figures were really nice. Officially 28mm, they seemed bigger, but I didn’t measure them. 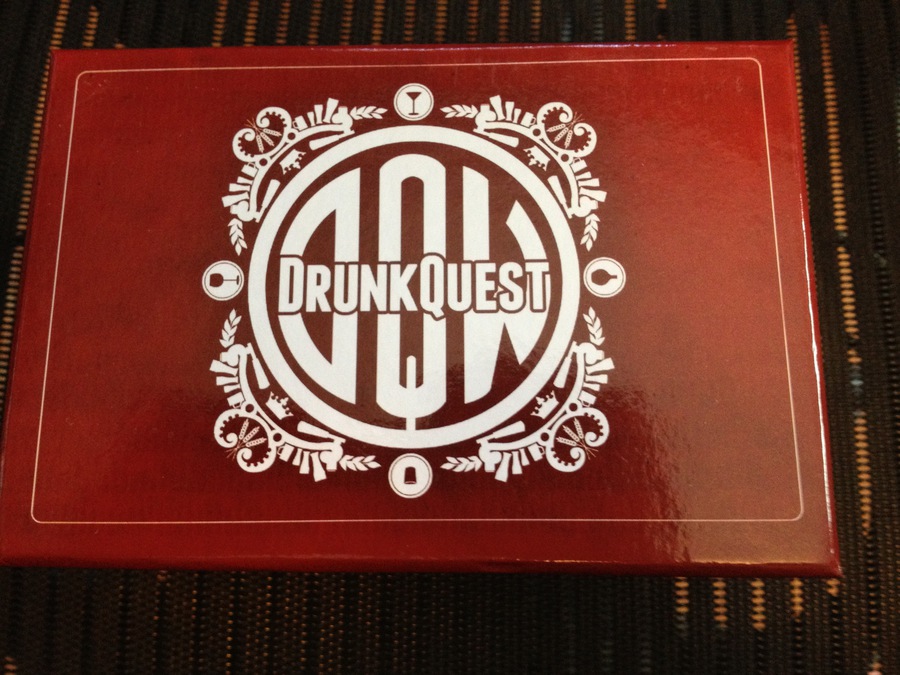 I also played a demo game of Drunk Quest.  It was 2 in the afternoon, so I just drank water.  It’s like Munchkin with drinking.  It was super fun, and I bought a copy.  There’s a tournament with real drinking tonight.  I might join. 🙂 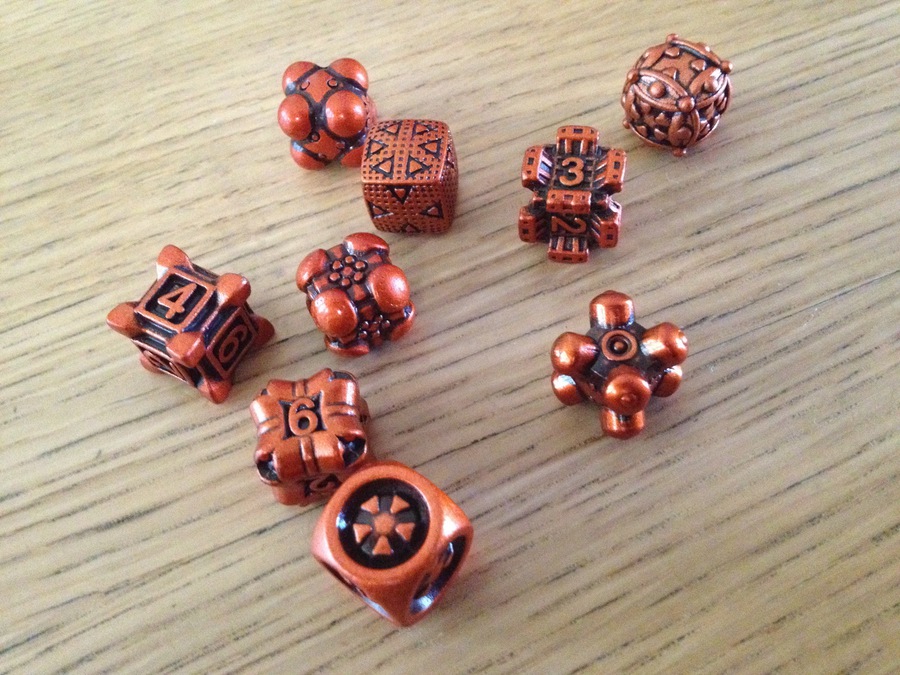 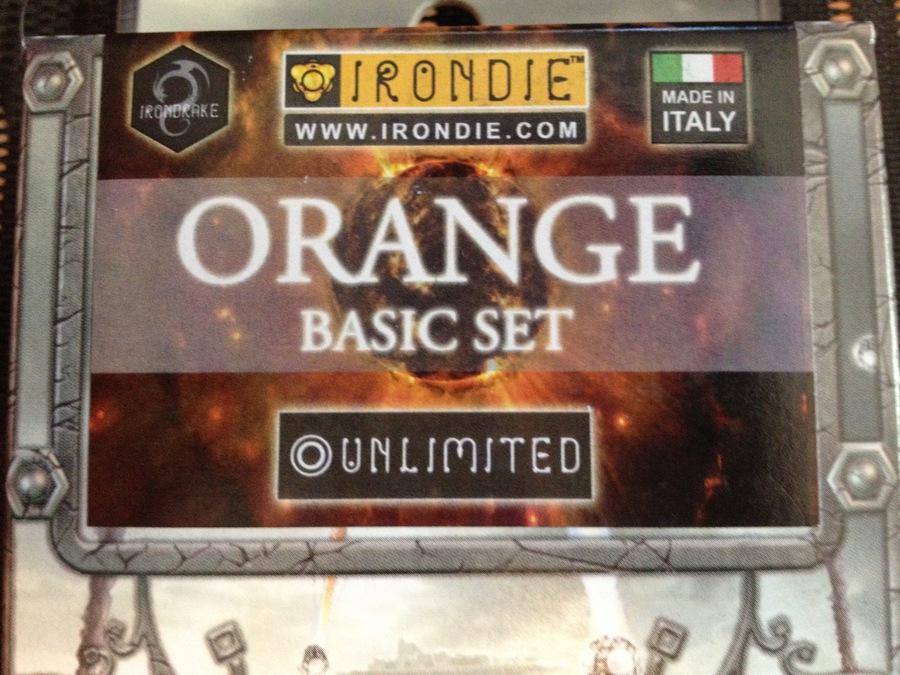 I picked up a set of Irondice.  They are “silver-plated miniature white metal and covered with a translucent paint”.  They come with rules for a dice game, but I just bought them because they look freakin’ cool.  I’m just going to use them as regular D6 for gaming. 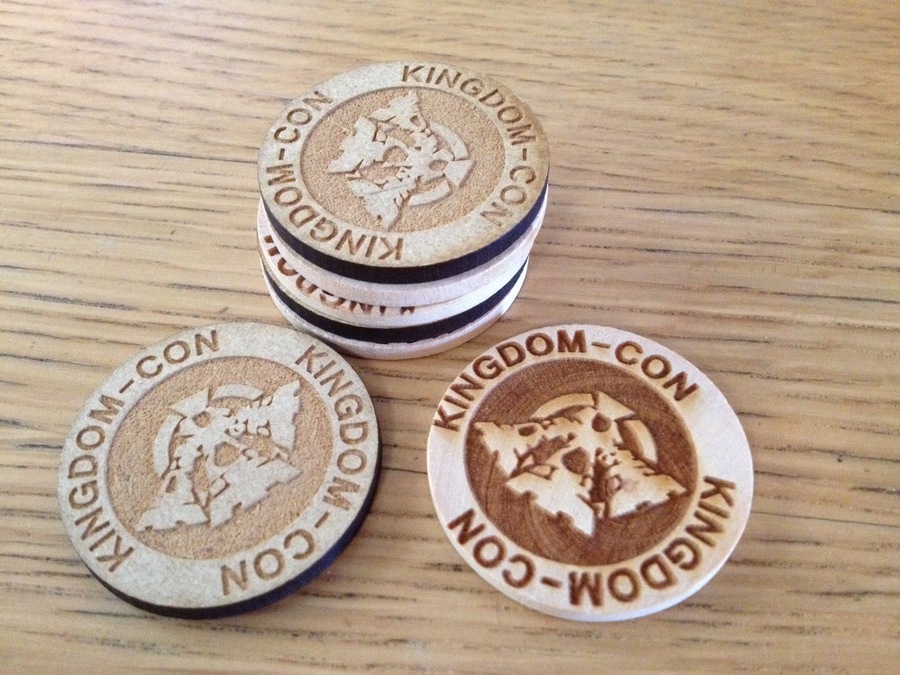 For every event / demo / etc you participate in, you get a token.  At any time, you can cash your tokens in for prizes.  It’s like skee-ball! 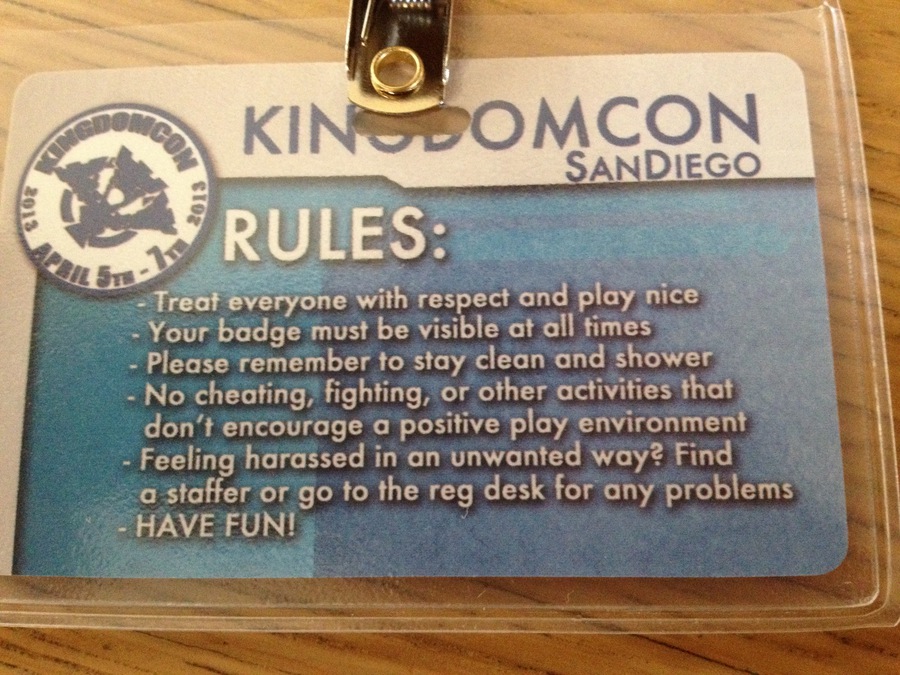 This part really made me laugh.  Right there in the rules, right on your badge, it says, “Please remember to stay clean and shower.” 🙂

In closing, here’s some pics I took in the wargaming room.  I have nothing left to say, except I’m going back today.  I plan to attend a demo of Flames Of War. 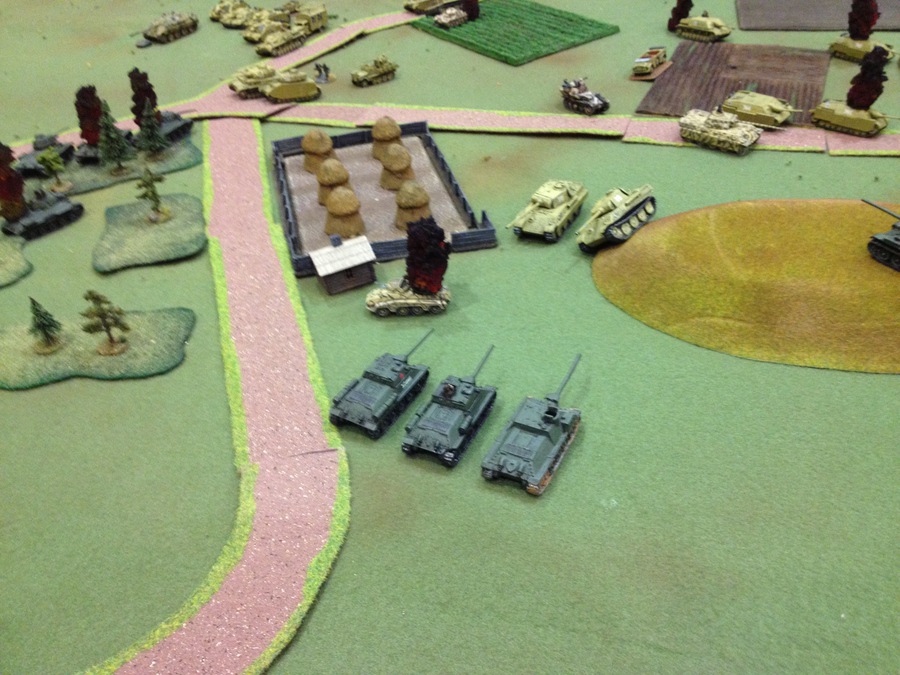 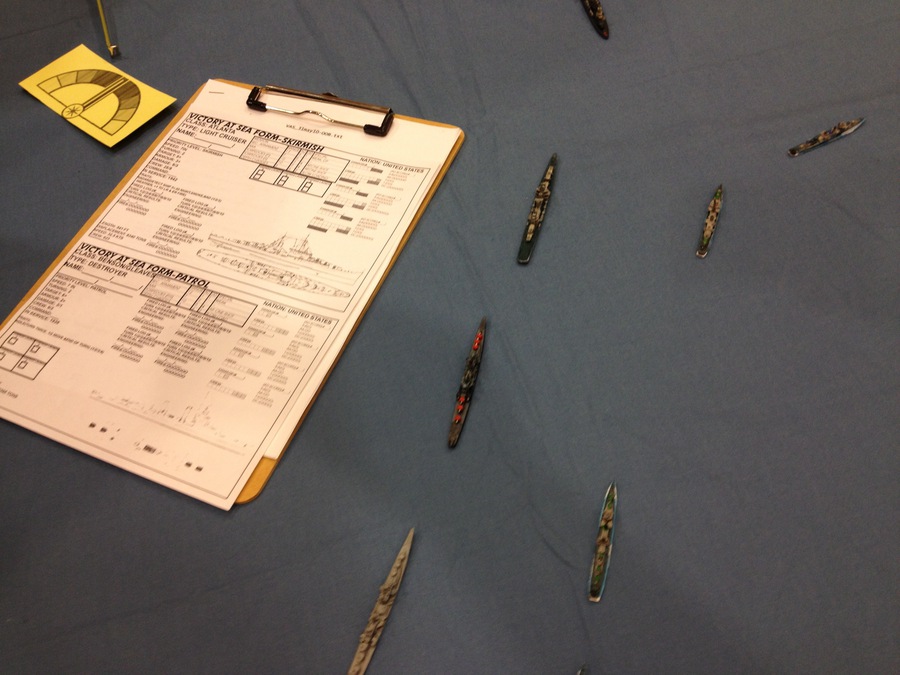 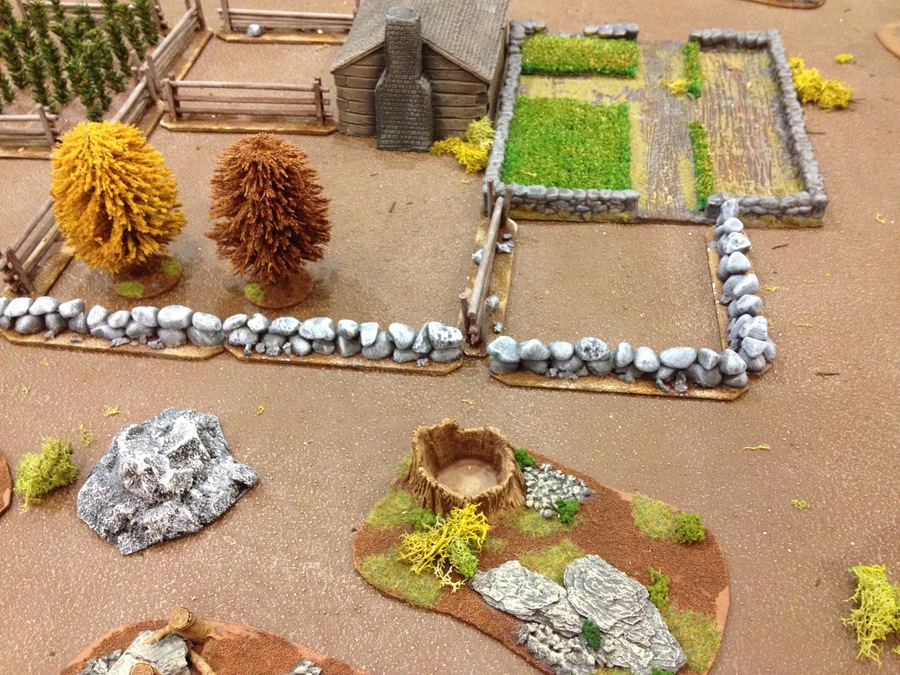 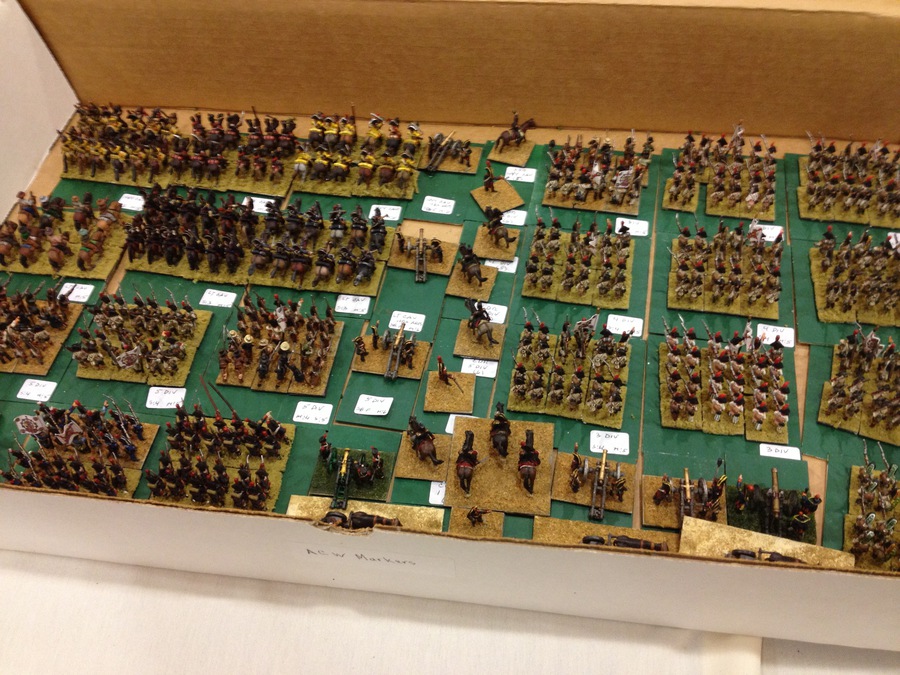 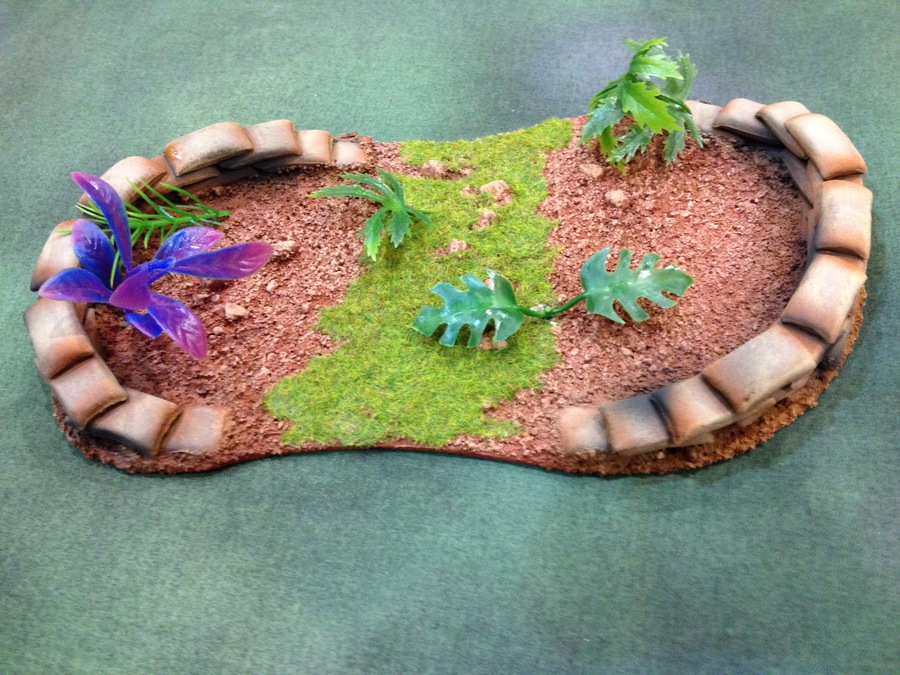 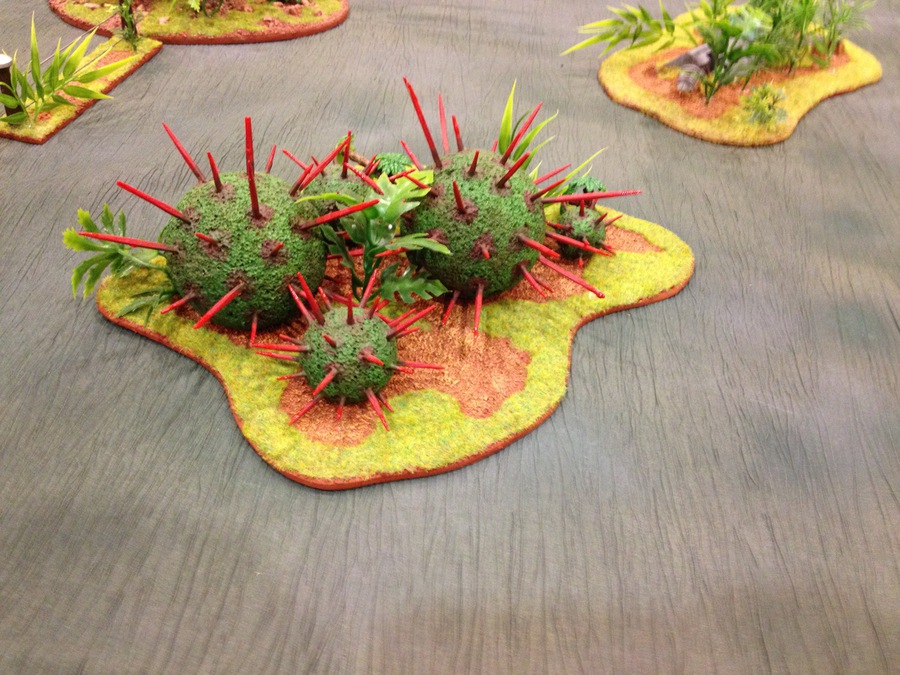 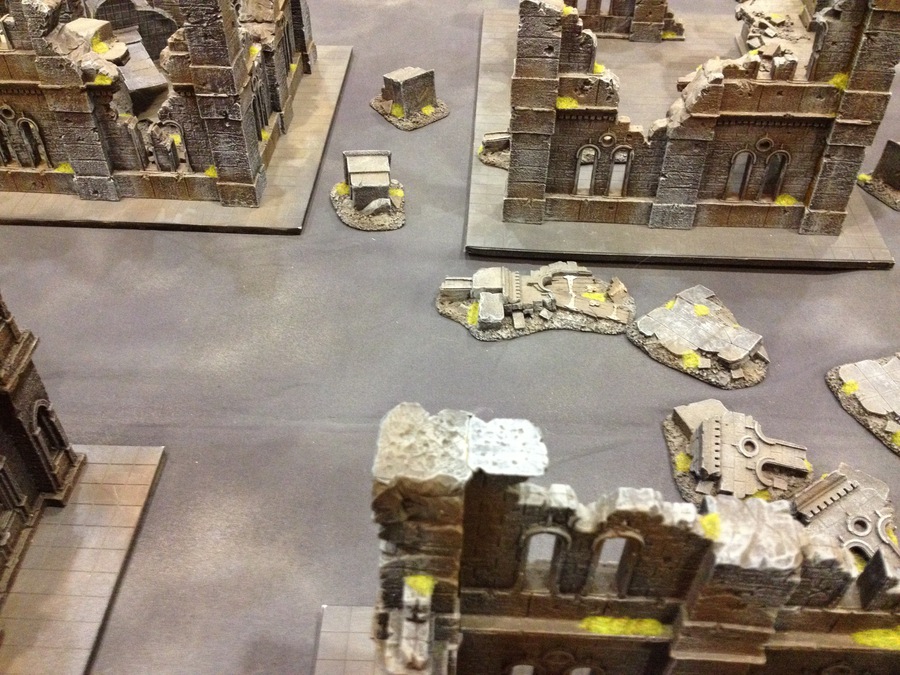 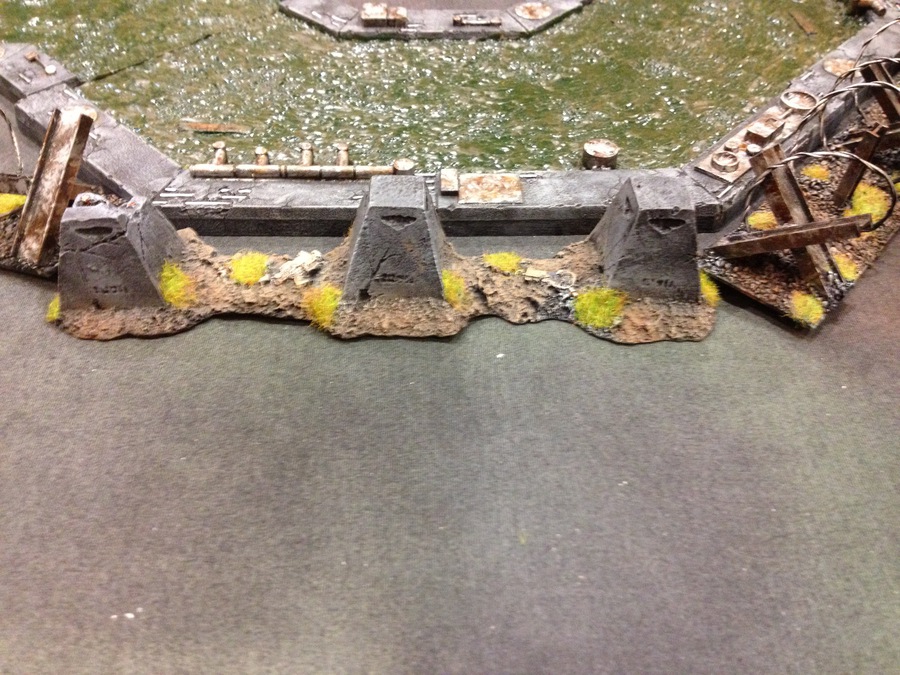 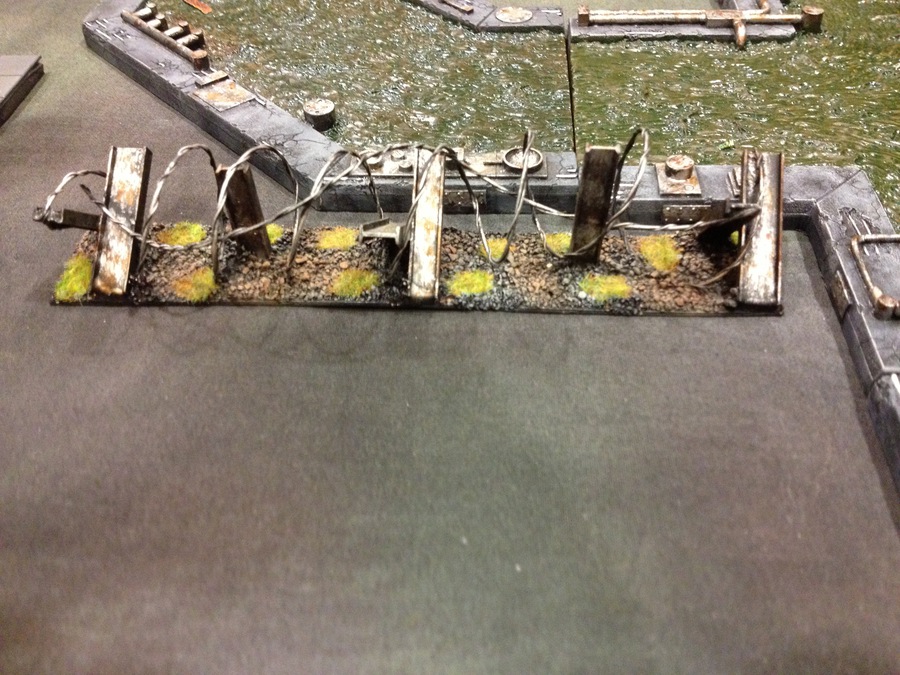