Today I finished the Dreadball human team that comes with the boxed full version of the game.  Now both my Dreadball teams are complete! 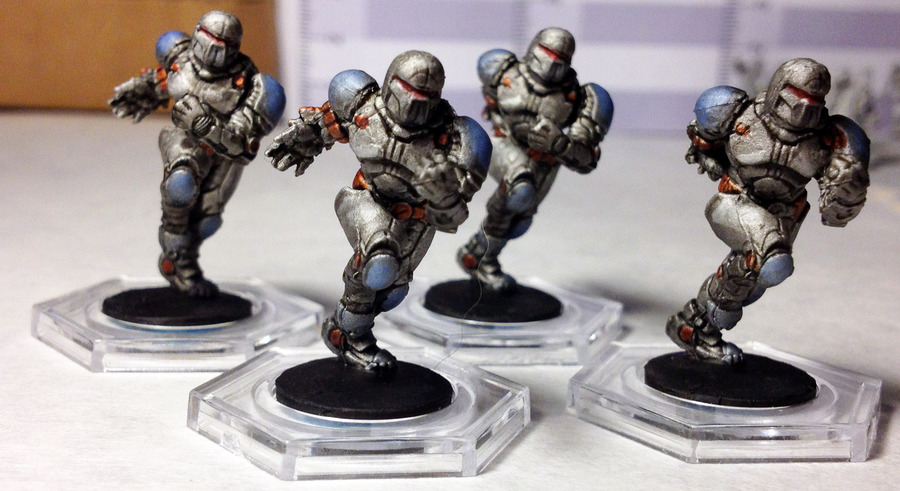 Front view of the human strikers. 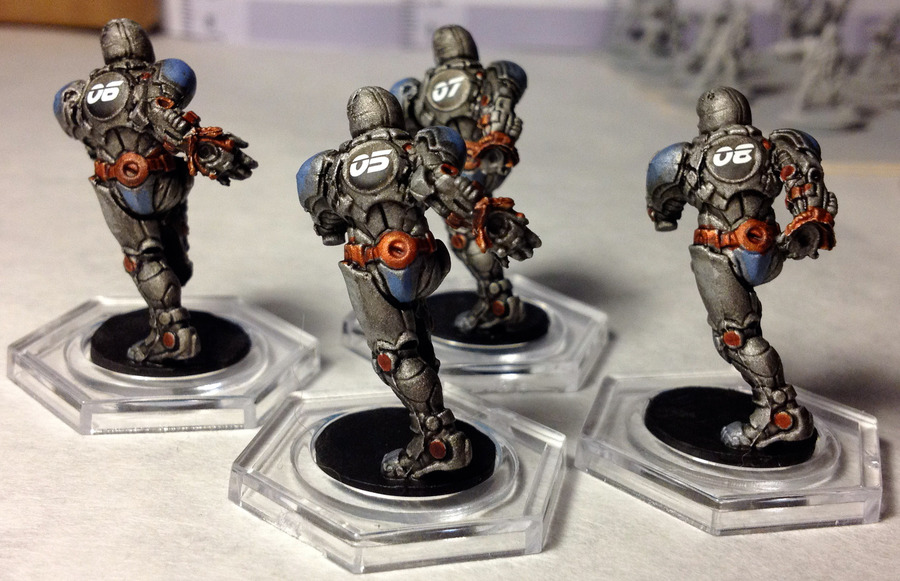 Rear view.  Those are the number decals from Mantic.

This was my Reddit painting challenge for this month.  Complete!

Hello.  I noted a few days ago that I was painting GZG’s Grav Mini Drones for Reddit’s April mini painting challenge.  Well, they are complete. 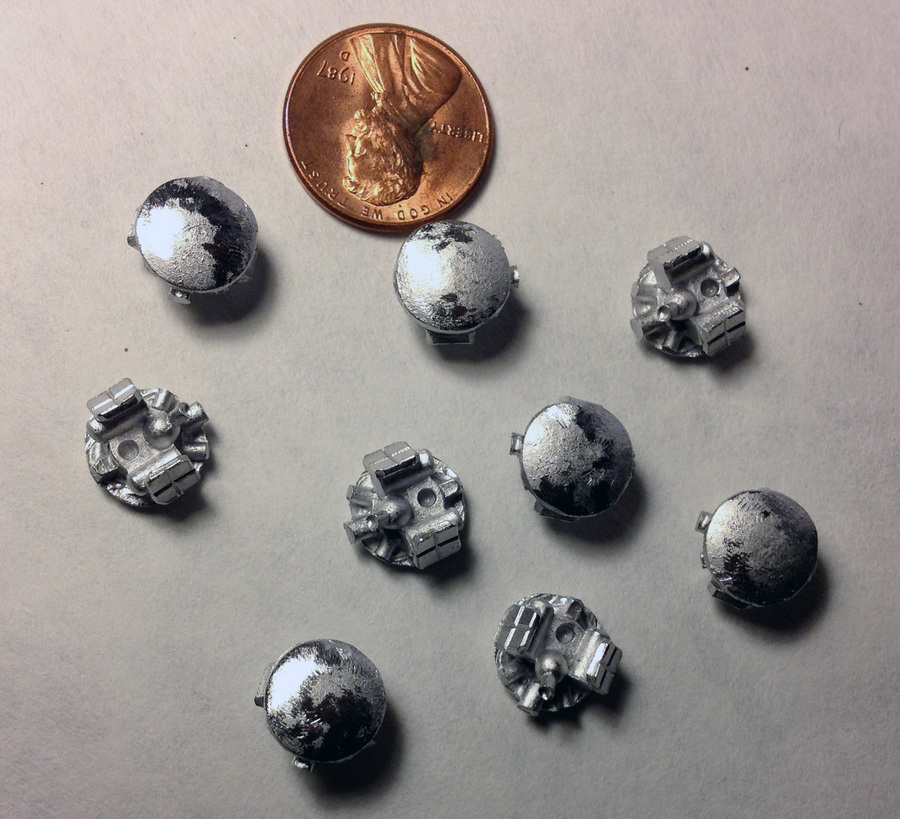 Cleaned up and ready for primer.  As you can see, they are pretty small. 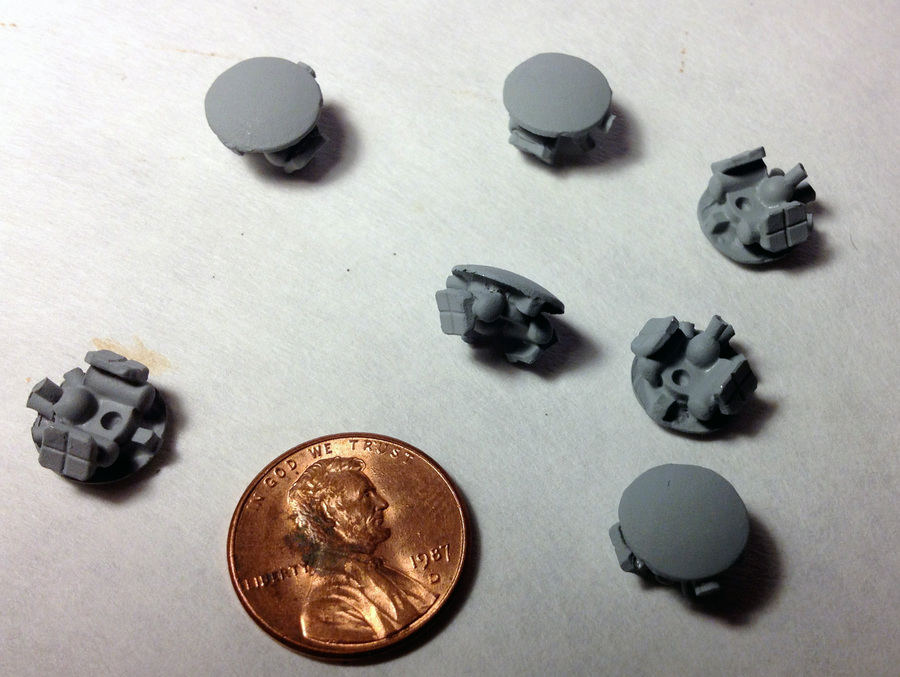 Primed.  “But,” you ask, “There are only seven.  Where are the other two?”  Well, I primed these in the backyard at night, and when they were dry and I was bringing them back into the house, I dropped two in the grass.  The very long grass that I have not cut in too long.  I went back outside with a flashlight, but I could not find them.

The next morning, in the sunlight, I found them right away. 🙂 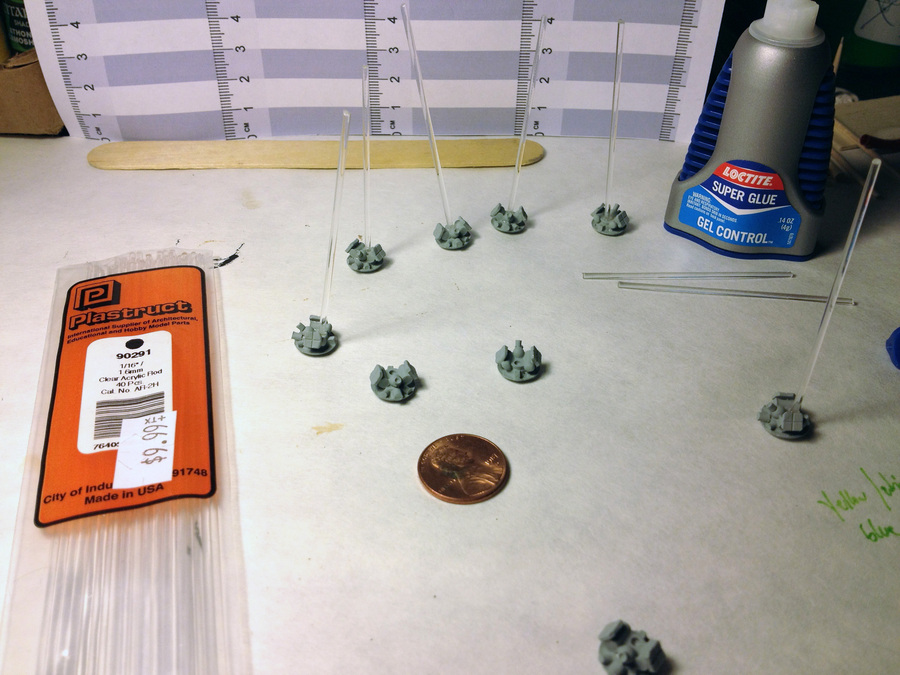 Attaching the “post”.  I got some acrylic rod at the local hobby store.  It cut easy with wire cutters, and super glue worked just fine on it. 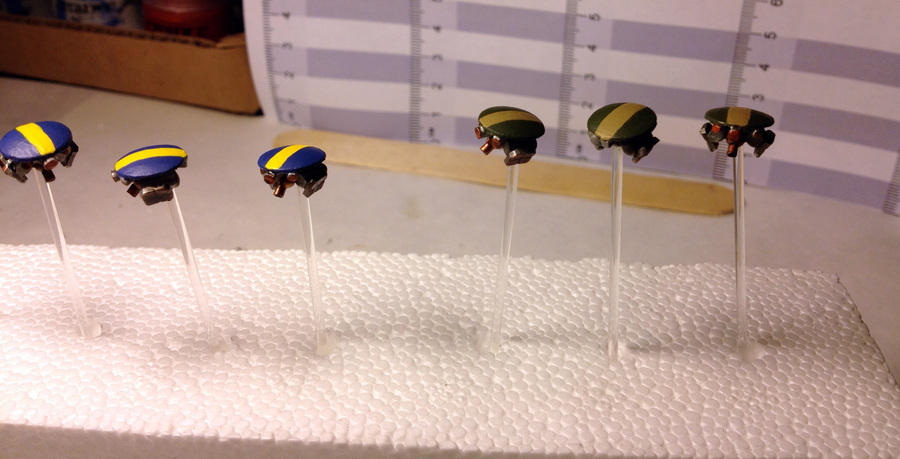 Painted.  Not the most realistic paint job, but a real drone would have been solid gray or dull black, and where’s the fun in that?  Most of the detail is in the bottom. which you really won’t see much of during game play, so I had to do something to give visual interest to the smooth top. 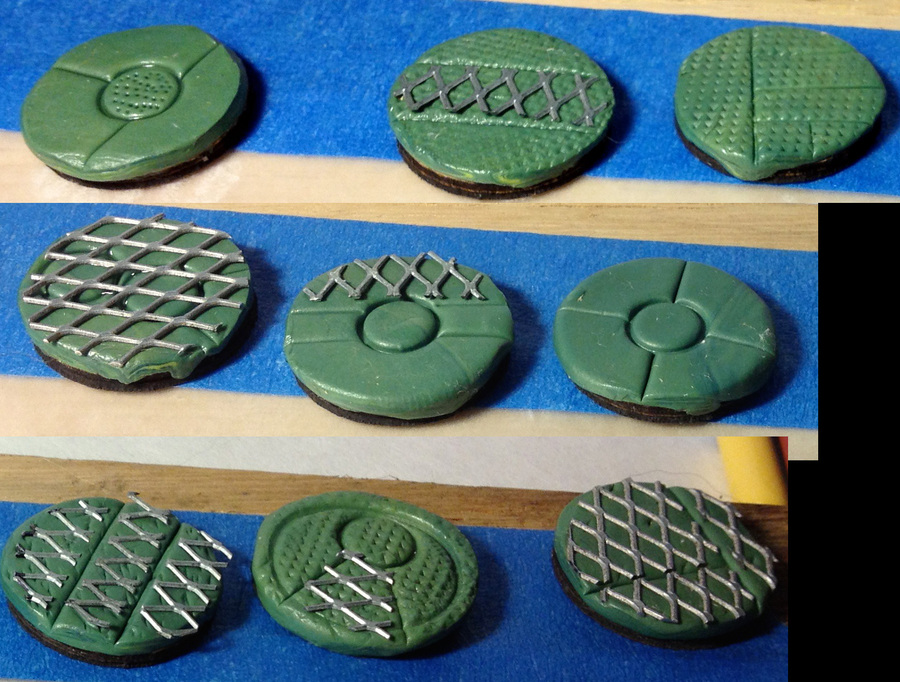 Making bases with Green Stuff.  This was the first time I didn’t have to work around the figure’s existing base, so I had a lot more freedom. 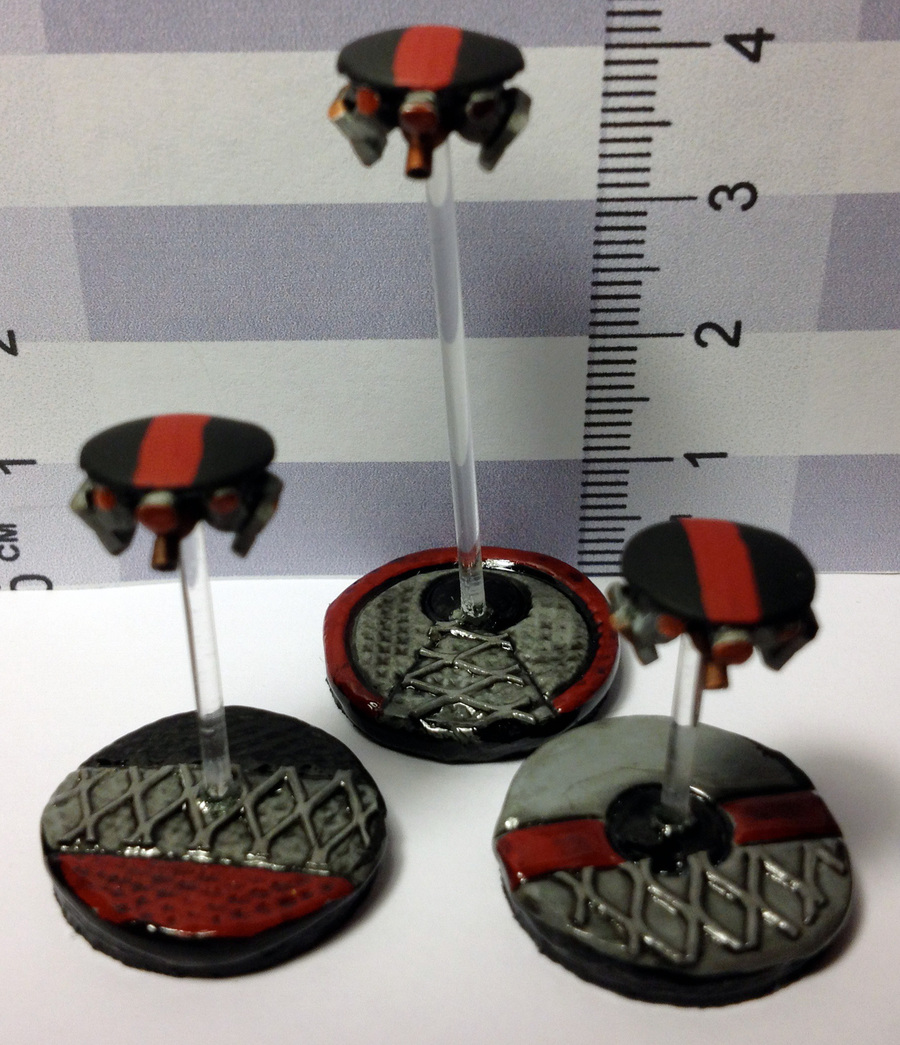 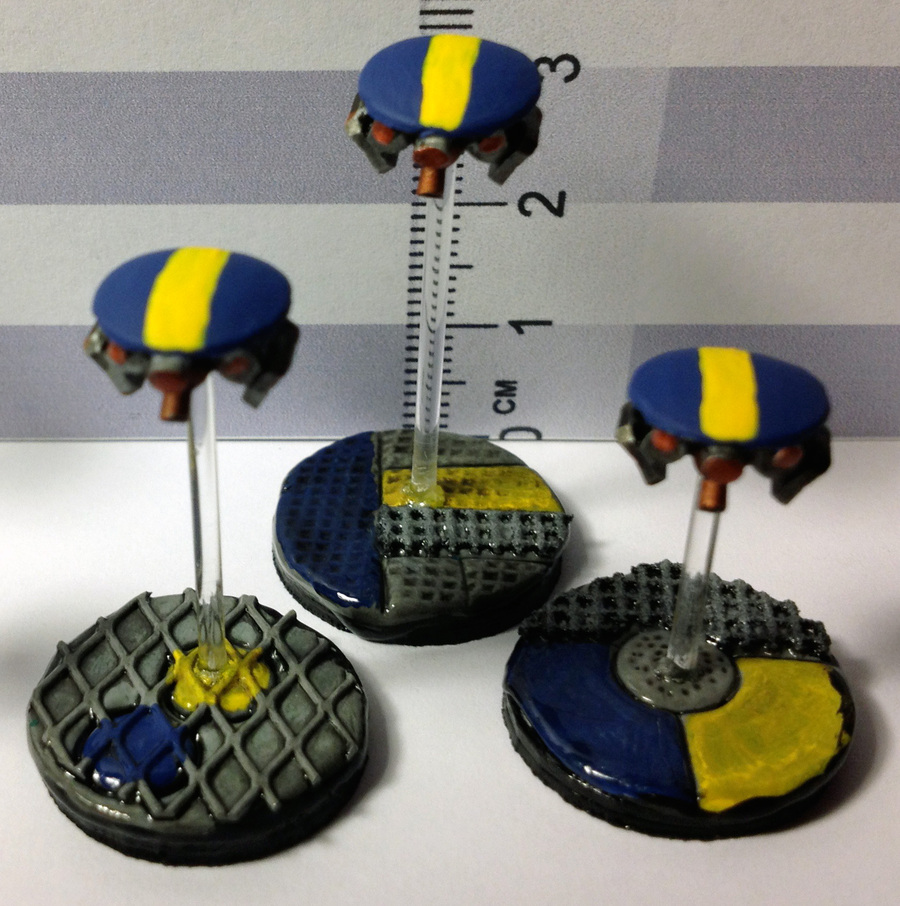 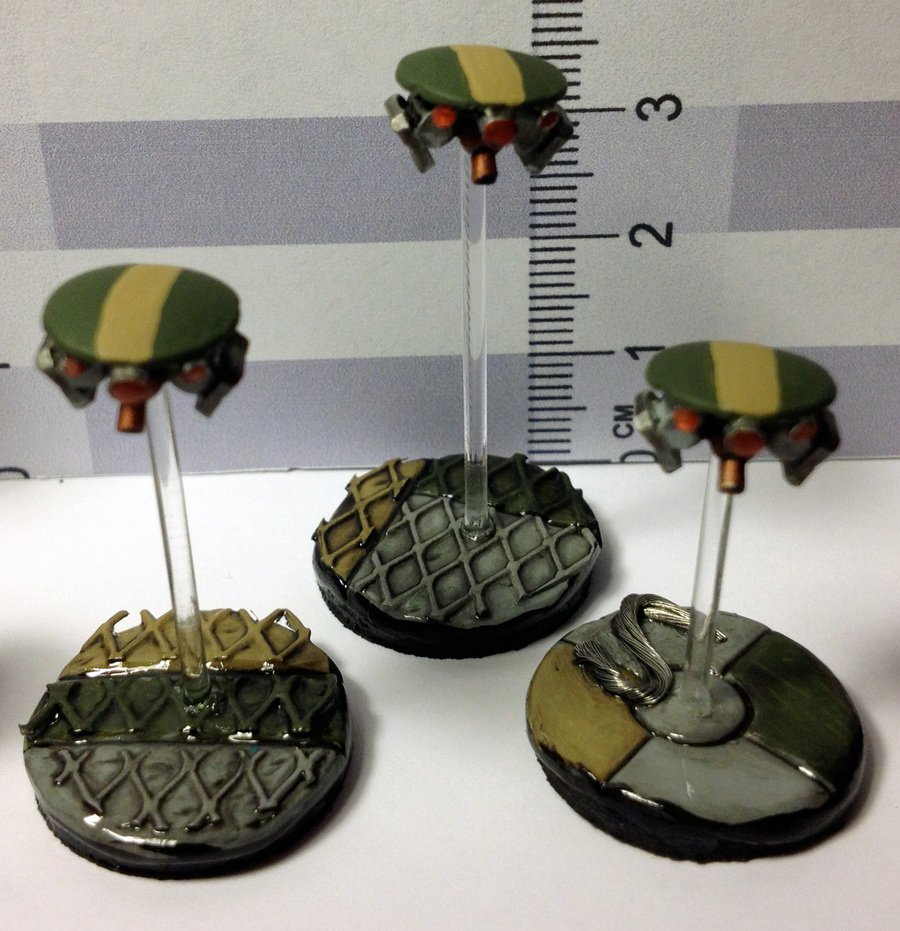 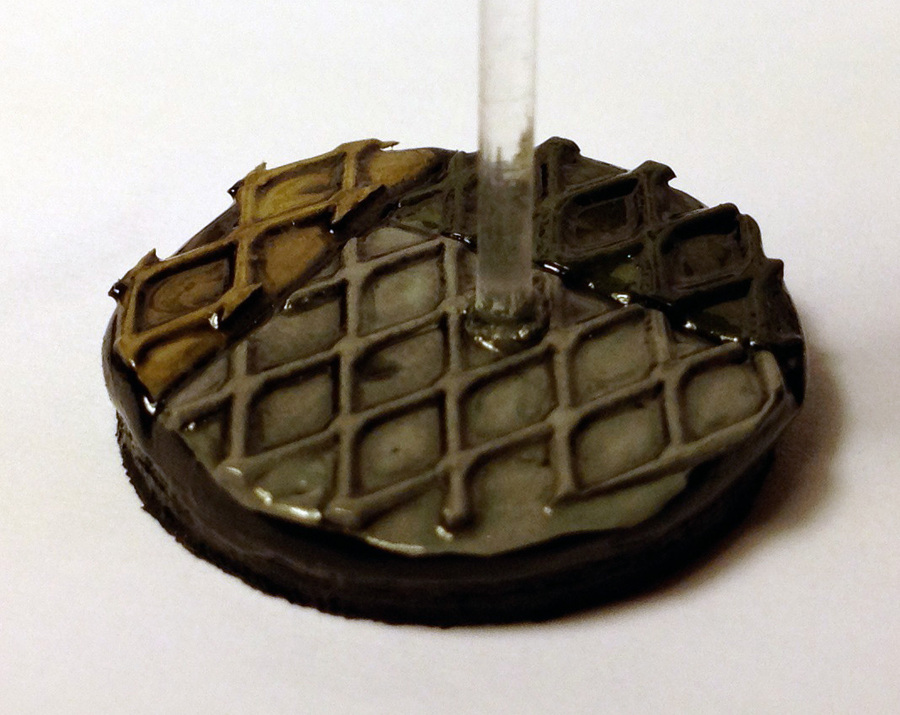 This base is my favorite.  I might go with variations of this base in the future.  It looks good, and was fairly easy to make and paint.

What would I do differently?  I would take more time making sure the base edges were flat.  Some of them had rounded bulges on the edges, and when I painted the edge black, it resulted in some sloppy looking paint jobs.

I’m a redditor.  Reddit has several excellent subreddits related to gaming and miniatures. http://www.reddit.com/r/wargames is an especially friendly place for 15mm Sci-Fi gamers.

Anyway, a new subreddit, http://www.reddit.com/r/taleofredditgamers has just been started, and each person states what they will paint, then posts progress reports.  The project must be done by the end of the month.

This month I am painting GZG’s Mini Grav Drones, and I’ve already run into problems. 🙁